Founded in 2007, tumblr is a popular micro-blogging platform used to share multimedia content such as videos, audio files, quotes, texts, images and gifs. On tumblr, users can personalise everything: they can create and develop their own webdesigns and they can also “like” and “reblog” content (repost someone else’s content, whilst crediting them), which makes tumblr an active and communicative platform.

With 69% of millennials using this platform, tumblr has been turned into a dynamic and inspirational platform for:

With the aim of creating a marketing campaign, specifically targeting millennials, many companies are branching out and successfully using this platform.

To inspire your next web project, and to encourage you to experiment with new ideas, here’s a selection of 7 of our favourite tumblrs. Even if you think that tumblr is a social network from the past… you will be surprised about how creative and futuristic they are nowadays! 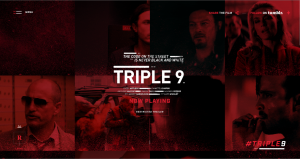 Created for the launch of the movie ‘Triple 9’, a crime/drama movie, this website uses all the possible features of tumblr: images, animated gifs, videos, background sounds, tags and of course, the “reblog” button for sharing.

As you land on the page, the experience starts by asking you your age, before showing you the film trailer. The website then invites you to discover specific landing pages to learn more about the movie, including key points of the story and the different characters.

The design is modern and immersive; it pushes the user to learn more about the movie and to share the content. It is also very interesting that they decided to dedicate one page of the website for each important key point of the movie. 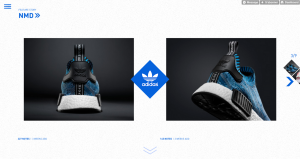 Created to present the Adidas Originals Collection, this tumblr is a very clever way to share the brands latest trends and products to their key target audience. The layout and the style of the website is very simple but highly effective: the trainers are nicely highlighted and the images are super clean. In this particular case, “less” is definitely “more”.

Using this platform is very interesting because the users (like fashion bloggers) will be able to collaborate and interact with the brand by “reblogging”, “liking” the images, or even by submitting their own pictures. Also, the choice for the brand to use tumblr shows that they adapt their marketing to where their users are. 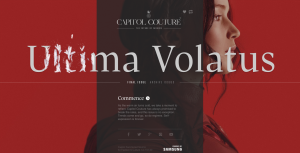 Based on the ‘Hunger Games’ franchise, which grossed about 3 billion dollars in the box office, this tumblr is aimed at the franchise’s huge fan base.

The Capitol Couture website is designed to immerse users into the world of the Hunger Games’ Capitol. Users are presented with images and animations from key parts of the movie as well as facts during the shooting of the films and the art and fashion challenges they faced.

By using tumblr, this has allowed the creators to fully interact with the community by making the most of tumblr’s features such as liking content and allowing for “reblogging”.

The execution of the idea is brilliant. The website kept the franchise’s fan base active during the wait for each movie and even more so now that the films have come to end. By providing them with interesting facts such as actors’ profiles, the design inspirations behind some of the films architecture, fashion tips and competitions, the fan base feel as though the franchise lives on.

Las Fantasticas Aventuras (The Fantastic Adventures) is a tumblr website created for the release of the Ford Focus car. The website starts by showing its users a short video of a man trying to chase a flying piñata wanted by the local authorities.
The aim of this website was to encourage users to enter a competition. The competition required users to create their own story of the different adventures the man could face whilst chasing the flying piñata. The creative team behind the website would then turn the winning story ideas into a video to complete their initial footage.

The idea is very fun and gets the audience involved. The story about the wanted flying piñata makes the website original, and the horizontal layout used is perfect to show the evolution of the story and resembles a car road trip. The creators also pushed the features of tumblr further. Rather than just having “like” and “reblogging” buttons, they also invite users to be part of the story’s creative writing process, which make this example very interesting. 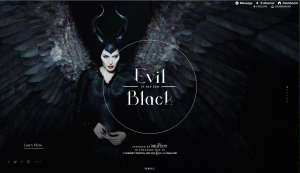 Another movie website that caught our attention is the Disney Maleficient tumblr. With a really strong design and a fantastic atmosphere directly inspired by the movie, this website looks very mysterious and is super elegant. In this case, the strength of this tumblr resides in the quality of the pictures and animations. We can discover the most interesting and stunning special effects of the movie on this website.

As mentioned on their website, “Bold is Beautiful”. Even if the website is really dark, the different interface elements and the grid layout with the movie’s previews in form of square gives a strong style to the website. 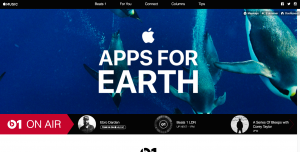 Powered by Apple, the Apple Music tumblr gathers the latest trends in the music industry. The design is quite simple, but the images are big and bold. The animations and videos also make it a visually entertaining tumblr.

The website is used as a platform to introduce the latest music trends, and Apple seamlessly link the tumblr to their iTunes website. This therefore allows them to to reach their ideal target audience, i.e. those interested in the latest music news.

The idea of using tumblr is really interesting as it’s a great platform for young people to discover new music. The content is therefore also of genuine interest to the primary tumblr users. The navigation between each page is really intuitive and we love the simple and clean design of the website. We are also completely mesmerized by the infinite looping gifs. 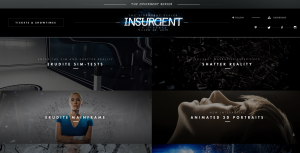 Finally, the Divergent Series website is a really interesting one. This Sci-fi action film is mainly targeting young adult, which is why using tumblr’s features is a great choice. What is really impressive is that they have coded elements with webGL and GSAP. Who would think that a tumblr website could combine its classical features (“like”, “reblog”) with advanced code techniques to create 3d and interactive elements?

This is probably our favourite tumblr as the amount of work, and the techniques used to code it, makes it an ultimate technology gem. This website is really interesting because it has a lot of interactive elements: dynamic effects when hovering on certain elements and 3d animated images.

What can we learn from that?

As you have probably seen, tumblr cannot only be used for personal entertainment but also for a number of businesses/ brands. You should definitely consider using this powerful tool if:

And even if this is not the case, keep in mind that tumblr is a very good platform to get inspiration and to see trends merging from the web!

If you’ve got a few minutes to spare throughout the day: https://www.tumblr.com/tv