For any content marketer, there is nothing more disheartening than spending weeks or months creating a content campaign only for it to flop in the outreach stage for seemingly no reason. However, the problem may not be your content, but your timing.

For every piece created it is important to ask yourself why this brand would be telling this story right now that makes it relevant to the media. In other words, you need to engage in content planning to be sure of the campaign’s hook and time the execution of the campaign, or even certain press release angles, accordingly.

Start With Outreach In Mind

If you work within a campaign management team, it can be easy to get carried away in the creation of content that fits the client brief without fully considering how the campaign would be outreached. Including your PR team in any ideations can negate this problem, bringing in those who have an eye for what journalists are looking for, and experience landing coverage for numerous campaigns.

It can also be a great idea to think about design at this stage. Involving designers early on will mean you have all hands on deck to create the most visually appealing and effective campaigns, rather than trying to pigeon hole a campaign further down the line and stunting creativity.

Content planning is key. Knowing what national holidays, obscure celebration days and key dates are coming up can provide you with a plethora of new angles to latch on to for your content and press release angles to create.

Finding or creating a great content planning calendar makes this exercise especially easy, keeping you ahead of the upcoming news trends and conversations. In addition, knowing the news at the time of outreach will also improve your chances of landing your story. Gaining coverage on high tier publications will be simpler if you keep up with existing conversations, allowing you to tap into these and position your content in a way that adds to the on-going story.

A great free tool for content planning is the events calendar provided by Twitter within the analytics section. The tool not only lays out key upcoming dates, but also the volume of tweets and impressions expected, as well as a demographical breakdown. 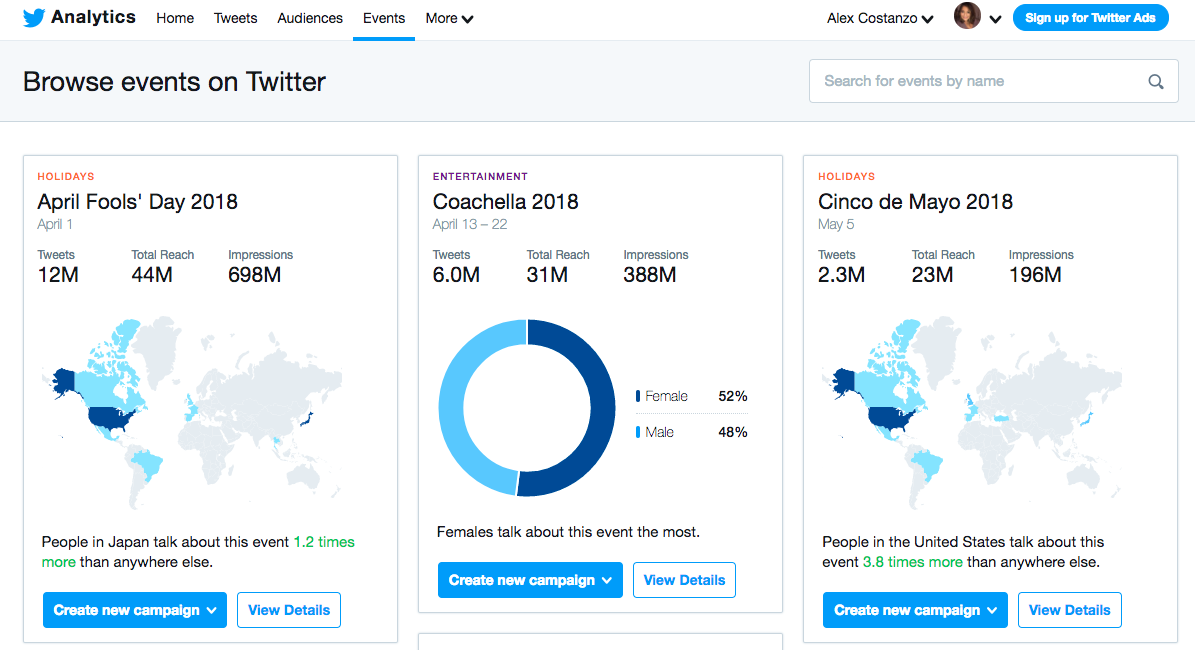 …But Don’t Base Your Campaigns On Them

While utilising special days as news hooks can be a great tactic, it’s also best not to rely to heavily on them for the actual content. For example, creating a piece on the “15 Biggest April Fools Pranks Of All Time” might be interesting on the 1st April, but will be old news by the 2nd. Not only are you putting an effective expiry date on your campaign, by tuning into certain days you run the risk of getting lost amongst all of the other content circulating around the topic and make it a lot harder for you to make an impact.

Instead, focus on creating evergreen content that can be re-angled in a number of ways to fit different events and days and continue to gain coverage throughout the year.

An example of the success of campaigns worked in this way can be seen in the interactive tool we created for TotallyMoney on The Falls and Rises of Film Franchises. The tool compared the critical, box office and fan success of popular film franchises, testing the popular theory that film franchises get worse as they progress.

By involving the PR team throughout the creation process, we were able to map out a number of upcoming hooks to sell in the tool from upcoming award nominations to new film releases, including the latest in the Star Wars franchise. You can explore the infographic below or the tool here: