Position 0 – How to Earn a Google Featured Snippet in Search

What’s a Featured Snippet? And how can it help my content visibility?

In 2012, Google added a feature to their search system, called Knowledge Graph, incorporating a side bar with data relating to search queries, and an answer box, drawing from Google information databases.

This provided a new way for a searcher to uncover the data they were after. Instead of having to click through to a site, or skim the metadata shown in the searches, the answers came directly as a result of their search.

It was more fluid and more intuitive than the raw SERPs that had already existed, but it meant a reduction in click through for the sites trying to offer the information themselves.

In 2014, Google added a further feature that accounted for that as well as adding a vast amount more to their information. They incorporated third party websites into the “Answer Box” section of their Knowledge Graph system, with an algorithm that searched for specific forms of data to offer them up in response to certain kinds of search.

This provided an SEO opportunity for brands, as this data would then occupy “Position 0” on the rankings – at the top of any search, regardless of where the website itself appeared in the results.

It’s not random; there’s a careful process that analyses the structure of your site copy, which determines the information that will go into that box. Which means that if you target your copy formatting correctly, you increase your chances of acquiring that valuable top position on the results.

How to structure your data for Featured Snippets

The first thing to note is that in the vast majority of cases – in 99.58%, in fact – Featured Snippets will be drawn from the top 10 results of a search. This means that you can’t just aim for a Featured Snippet and let the rest of your SEO strategy go to waste: it’s an effective part of it, but you shouldn’t rely on it alone for your success.

It may come as no surprise that Wikipedia holds the majority of snippets due to the breadth of the data it holds. What this means for your brand is that you’re much more likely to be able to claim the top spot if you focus on niche data, specific to your industry, and on long-tail keyword searches that Wikipedia probably doesn’t answer directly.

Long-tail keywords can be identified using keywordtool.io – or other keyword identifiers such as Long Tail Pro, UberSuggest, Google Auto-Suggest or SEMrush.

SEMrush has two other advantages for keyword management – first, that it can track competitor keywords against your own, allowing for more targeted strategies, and second, that it can be used to identify existing featured snippets for both your brand and your competitors, as shown below.

As you can see, we’ve had some success producing featured snippets for Vonage already – the following image displays how it appears in an actual search:

There are two ways to approach targeting featured snippets. The first is that you can create new content to meet opportunities identified during keyword research. This is the most flexible tactic, as it doesn’t constrain your existing material and allows you to add additional value to your site for your clients and customers. The downside is that it can be resource intensive, and can overlap with your existing copy and leave your pages clunky and unnatural.

The alternative, then, is to restructure your existing data. This has two advantages – you have the information already, and you avoid the aforementioned issue of repeating yourself and making your page unnecessarily mechanical. The drawback is that while paragraph snippets (discussed below) are usually easy to write your copy for, other information, particularly complicated or extensive information, can be difficult to rearrange into the correct format.

That said, most data samples can be structured into the correct form if approached with the right knowledge in hand.

There are three types of Featured Snippet, and each of them has to be targeted for in a different style. Each of them, however, responds well to keywords utilising question words, as found in a study of over 1,400,000 snippets by Ghergich & Co. and SEMrush. Have a look at the best format for each type of snippet below:

Paragraph snippets are arguably the most common and definitely the most versatile. A simple block of text and a link to the source page, they’re commonly direct answers to the question posed in the search.

Accordingly, they’re best presented with the question included. “Who is the Pope?”, “Why is the sky blue?”, “Should I wear gloves while sticking a fork into an electrical socket?” are all likely to result in a paragraph snippet being earned – “why” and “should” result in paragraph snippets in over 99% of cases, though “who” is only a paltry 87.86%.

The average length of a paragraph in answer to a snippet is about 45 words with 293 characters, though they can range up to as much as 97 words and 752 characters.

Lists primarily benefit from the “how” keyword as shown in the example above, as it tends to precede “how-to” guides – which are easily broken up into steps.

As noted in the Ghergich & Co. and SEMrush study, while the average number of items on Featured Snippet lists is a little over 4, the real advantage is a higher number.

Since there’s no upper limit to the lists that can go in, exceeding 8 items causes the list to be truncated with “More Items” as an option for the user. This is a good thing: those interested will have their attention caught by the top position and the readily available information, but will click through to the site for the expanded version of the data.

Ensuring that each bullet point or step is long enough to be shortened has a similar effect – anyone looking for more complete data will come through to your site.

Another keyword to focus on is “comparing” as comparisons often take the form of lists (and it’s shown to be successful in 31.94% of cases). 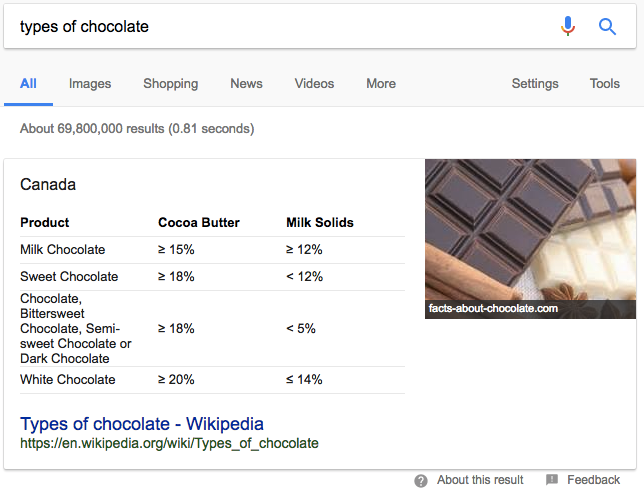 Table snippets work in similar fashion to the lists. A larger number of items is better for the same reasons, but while Google used to offer “More Columns” as an option, this is no longer the case, and there’s a maximum of three in which you can place your data.

It needs to be formatted in a table in order to be pulled through to the snippet as one – which can be an opportunity to get the edge over your competitors, if you find that they have valuable information but don’t have it formatted such that it can claim Position 0.

Keywords to focus on include “Which” and “Price” – the latter primarily supporting price lists arranged as a table.

Featured Snippets can be an excellent chance to take the top search ranking and promote yourself above competitors without necessarily having to fight for the number one or two positions.

If you already rank in the top ten for a keyword, it’s certainly worth considering attempting to format your data in the structures named above – especially if the Featured Snippet is already occupied by a competitor, where they’re likely to be drawing a lot of the attention of searchers.

There’s an additional opportunity that comes from targeting long-tail keywords for featured snippets: voice search. Regardless of whether or not you earn the snippet itself, by ranking for long-tail, question-based keywords, you’re automatically also targeting the natural vocal structure primarily used in voice searches, such as “how to…” and “what is…” This might be less suitable for results that don’t appear visually if you’re building for tables, but certainly paragraph snippet structuring will meet this strategy effectively for no extra work.

Ensure you’re meeting the keywords properly as in any SEO strategy, but make sure you’re using these table and list formats to access a niche with lower competition than basic copy optimisation, and you’ll find it’s your brand at the top of the charts.