Treating Google as the Consumer: Maneuvering the SERPs With Your Content

Adhering to the whims and fancies of Google’s unpredictable nature can be a tasking ordeal for content creators around the world.

What once seemed like a harmonious relationship, the bond between consumers and producers of content has become somewhat volatile, asking marketeers to be agile in their approach to content. As click-through-rates and organic opportunity steadily drops, what are we required to do with our content to compete in the SERPs? At September’s annual BrightonSEO conference, SparkToro founder Rand Fishkin gave his honest yet cynical address on the state-of-play for SEO.

Highlighting the key changes to how SERPs now appear and behave for consumers, Fishkin, while brutal in his assessment, managed to give much needed glimmers of hope to the attendees. In this post, we’ll reflect on how mobile web, featured snippets and Google’s ‘biases’ can inform the next steps for 2019, ensuring a bright content-filled future for all.

Mobile web has been subject to immense change in recent times, and while the stats may prove daunting, the stakes have never been higher for producing valuable content on the platform.

In years gone by, Google has appeared to be giving preferential treatment to mobile over desktop. In 2015, the mobile-friendly update or ‘Mobilegeddon’ as it became informally known, paved the way for mobile-friendly content creators to rank higher. Since then, we’ve also seen the Mobile-first Index and a number of other activities aimed at bettering the consumer experience on mobile.

However, while experience and usability becomes prioritised, this has had to come at someone’s expense, something Rand Fishkin was quick to highlight in his BrightonSEO talk.

“Google used to have two types of users –  content creators and searchers, now they only have one…searchers”

Fishkin does not make this statement in an attempt to expose some form of conspiracy, but merely to draw attention to how the SERPs are changing and those who produce content must do more to compete for clicks. In early 2016, almost 60% of searches produced clicks to an organic result on mobile, with an even higher percentage for desktop (65.56%). Since then, while desktop web remains the same, the statistics give a very different picture, with organic clicks dropping just under 20%, and no-click searches now in the majority.

This rise suggests that users are getting all they need from Google without having to leave the page they’re on. The response, however, should not be to disregard mobile web, but to prioritise it and find ways to optimise your work in a way that adheres to the biases Google shows towards certain things. This is less about seeing SEO as one big game but creating content for a certain type of searcher and making the most of the space available.

Snippet in the Bud

Making data instantly accessible for users is part and parcel of Google’s service with regard to SERPs. Google’s remarkable comprehension of what its users want is symbolised by additional features such as the featured snippet that sits in ‘page rank zero’. Results from queries such as ‘Ryan Gosling height in feet’ give us little reason to leave page one on Google or even scroll down the page, as we can instantly find what we’re looking for. 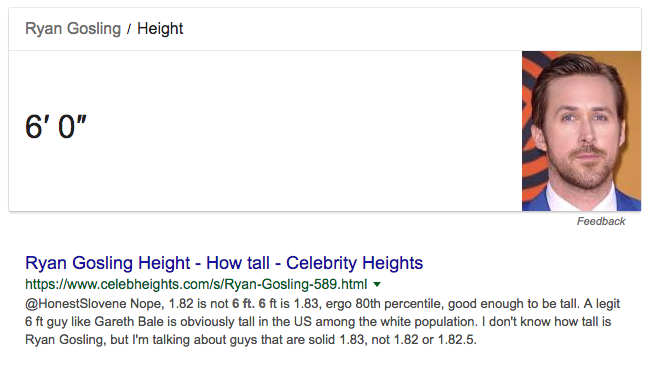 Incredibly, Google extends this service beyond the height of random celebrities, giving immediate responses to searches about news, facts and even recipes. Optimising for featured snippets allows your content to be scraped by Google and repurposed for the user, whether it be a paragraph, list or table. It’s presence in the SERPs appears to be more relevant than ever, with featured snippets and related questions appearing in 40% of queries according to HubSpot.

Producing content with this feature in mind must force you to treat Google as your customer, giving them what they want to then pass on to their customers through their own services. This strange cycle of events to achieving an appearance in the featured snippets becomes even more convoluted in the realm of link building, however. Content marketers such as us at Kaizen face the constant battle of relying on other sites to link to our content in a way that can be optimised by Google.

Fortunately, a critical feature of virtually all the content we produce, and part of our Golden Rules for Link Building Content, is to integrate data into the work we produce. Content that answers existing questions that people are likely to ask is one of the few ways to find yourselves ranking in the featured snippets. Below are two campaigns we launched last year which still currently appear in the featured snippets.

The first was a data study of seaside ‘Staycation’ towns in the UK for Credit Card checking service Marbles, whose coverage on House Beautiful appears in page rank zero. Secondly, was a study we carried out on the world’s most and least reliable airlines for medical travel insurance provider Get Going. In addition to being covered in the likes of Yahoo and the Independent, it was the link on the Reader’s Digest site that appeared in the featured snippets for the query of ‘most reliable airlines’. 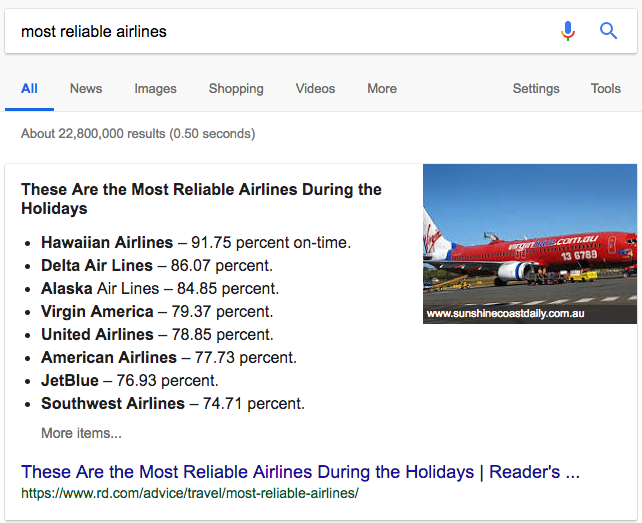 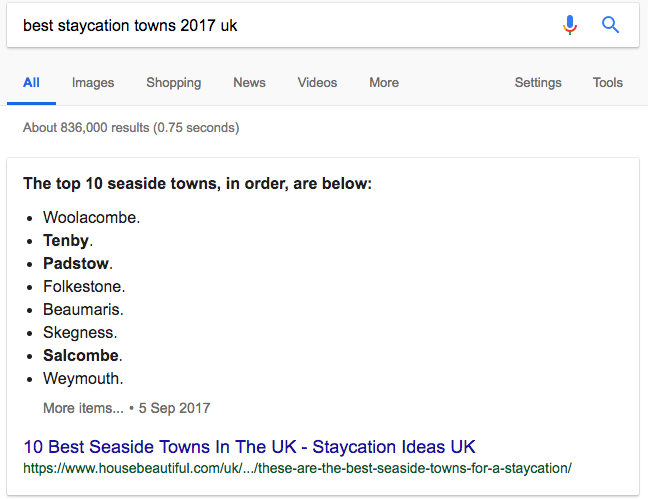 Achieving visibility in the featured snippets through our content’s coverage is a handy by-product of some of the work we do, but serves to show the occupiable spaces in the SERPs for your brand or client. A fundamental characteristic of the work we do at Kaizen is to bolster the credibility of our content through data. This is vastly important to us in the sense that it provides an actual grounding to the work we outreach to the press, but is often rewarded, as shown, by appearing in the featured snippets.

In an AhRefs study of the most frequently used terms in featured snippet queries, ‘Best’ and ‘Vs’ ranked 2nd and 3rd. While there may never be a set formula for appearing in the featured snippets, these findings imply Google’s leaning towards data, or simply the content that a searcher is looking for.

To conclude, the production of visual content that appeals to the nuances of Google’s scraping is not going to be possible for everyone given the varying nature of content, but it’s important to recognise where it’s possible. One of Rand Fishkin’s takeaways from his September talk was about matching the needs of the searcher in order to gain a foothold in the SERPs.

In September, Kaizen’s Head of Creative, Bobbi Brant wrote up her ‘Golden Rules’ for link-building content, firmly stating the importance of asking a question people are asking. What seems like such a rudimentary action for any marketeer is often lost in the wave of what seems like a ‘good idea’ at the time. Content is made for many different reasons and for many different audiences, but Google’s growing dominance demands that we consider them at all stages of production. Google will always endeavour to embody the user in all that they do, meaning that it is our job to treat them as one. Then we’ll all live happily ever after.